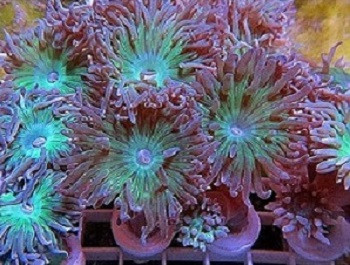 Sorry but this item is currently unavailable.

Please check back at a later stage.

Duncanopsammia axifuga, also commonly called whisker coral, duncanops coral, or simply duncan coral, is a type of LPS (Large Polyp Stony) coral. Duncanopsammia axifuga is a species of coral often encountered in the aquarium trade. It has become increasingly popular due to the relatively easy care requirements for the growth of the coral and the rate at which it grows. The duncan coral generally prefers to inhabit an established reef aquarium if brought into captivity. They live in saltwater, so an artificial saltwater mix should be provided for them to live in, and they require a temperature preferably between 75 to 80 °F (24 to 27 °C). These corals, like many other LPS corals, need moderate to high lighting to photosynthesize; compact fluorescent light fixtures, metal halide lighting, T5 high output fluorescent lights, and/or ultraviolet lighting can cater for almost all corals in captivity. Duncan corals also require a moderate to high current to bring them food such as phytoplankton or zooplankton naturally. However, target feeding can be supplemented by using a tool to dispense food onto the polyp's tentacles. This coral should be placed low in the tank, preferably on the substrate or on a low-lying rock, where the coral can form a colony. Propagating this coral is achieved by separating polyps from the base of the coral.

This product hasn't received any reviews yet. Be the first to review this product!

All prices are in USD. Copyright2021 Falcon Reef. Sitemap |