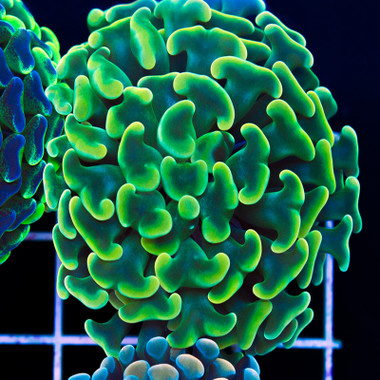 Sorry but this item is currently unavailable.

Please check back at a later stage.

Veron Corals of the World:
Characters: Colonies may form a continuous cover over the substrate many meters across although individual colonies are seldom over one meter across.  Colonies have the same skeletal structure as Euphyllia divisa.  Polyps have large tubular tentacles with few or no branchlets but with anchor, hammer or T-shaped tips   Color: Blue-grey to orange, usually with pale cream or green outer borders to the tentacles. Similar species: Euphyllia paraancora.  Habitat: Large colonies are usually found in shallow environments exposed to moderate wave action.  Abundance: Seldom common, but may be a dominate species in protected horizontal substrates and on rock outcrops in high latitude locations.

Description:
E ancora can grow to be a large coral.  Its skeleton grows in a continuous meandering fashion and is frequently referred to as the ‘wall’ hammer coral to differentiate it from the ‘branching’ hammer corals which have multiple heads that are separated by dead portions of the skeleton.  The coral is most easily distinguished from the similar Torch or Frogspawn corals by the shape of the tips of its polyps which have a characteristic anchor,  hammer or T-shape to them which gives it it’s common names.

The tentacles are most often a subtle but attractive green-brown to a cream color, but more striking colors such as bluish, neon green, orange, yellow and sometimes mottled with several different colors have recently been introduced into the hobby though they tend to be fairly rare and command a higher price.

Natural Environment:
Found over much of the Indo-Pacific region.  They typically live in shallow reef environments where wave action is moderate.

Water Current:
Prefers moderate non-laminar water motion that gently waves their tentacles.  They should not be exposed to strong water currents.

Aggressiveness:
Very High.  E. ancora can expand considerably from its skeleton and has sweeper tentacles that may extend another couple of inches further than the normal tentacles.  The tentacles pack a powerful sting that will win in almost any altercation with another coral.  In addition, E. ancora can grow fairly rapidly and to a large size, so it will tend to encroach upon any close neighbors over time.  They can however usually be in direct contact with other members of the Euphyllia family such as Frog Spawn or Torch corals without incident.

Feeding:
E. ancora are photosynthetic which will take care of most or all of their nutritional needs.  They will also take small meaty foods such as Mysis shrimp if offered during the day when the tentacles are extended and may benefit from an occasional feeding especially if lighting is marginal, but it is usually not required.  It may be helpful to temporarily reduce the water motion during feeding so that the food can be more easily transported to the mouth.

Tank Positioning:
Best positioning is on the rock work in a moderate water flow area of the tank where it can get strong lighting and has room around it to expand and grow.

Propagation:
Most E ancora Wall Hammer corals are imported from the wild as they are more difficult to propagate than Branching Hammer corals due to their skeletal structure.

This product hasn't received any reviews yet. Be the first to review this product!

All prices are in USD. Copyright2021 Falcon Reef. Sitemap |